As your golf coach there are three ways in which I can help make a difference to a players game. These three ways all have many implications if they are not addressed correctly…

Do you want to enjoy the game again?

New to Golf? Wanting to be the best you can be?

The name Mark Gibson is synonymous with golf.   For it seems a lifetime Mark has been associated with golf. It was destined that Mark would have a deep love of golf and it would be a large part of his life when at four years of age he was regularly on the golf course caddying for his father and had his first golf lesson on his sixth birthday.   With that start in golf it is most likely that you might spend a fair amount of your life’s work on giving golf lessons.

Mark grew up on the Gold Coast, Australia with golf as a major part of his life.  He was a gifted player who tried his hand as a tournament professional when the money in professional golf was not as it is now.  Mark always had a passion for teaching the game he loved.  He also had a thirst for knowledge. He has a desire to not only be the best he could be but be the best there is as a golf coach.   From his start as a golf coach at Royal Queensland Golf Club in the late 70’s Mark’s journey has been one of learning and discovery for this golf coach. Today Mark is the owner and coaching director of Mark Gibson’s Exceptional Golf @ Royal Pines Resort, leading a team of coaching professionals at one of the premier Golf Resorts in Australia.

Mark has been quoted as saying there is no better sight than the smile of a struggling player hit that super shot and this phosliphy has unpinned Mark’s coaching career from those just starting out to the Elite Professionals.

Mark is a passionate student as well as a passionate teacher.   He has seen his passion for study result in being 1 of only 3 with Certified Professional Advanced in Coaching PGA Accreditation and Master Fitter status as a club fitter out of the 1200 PGA members in Australia.   Mark has won the PGA’s top teaching award not once but twice being the PGA’s National Teacher of the year while winning Queensland PGA Golf Teacher of the year an unprecedented three times.

Every day is a fresh adventure for Mark who lives by the creed:

“Those who dare to teach must never cease to learn” – 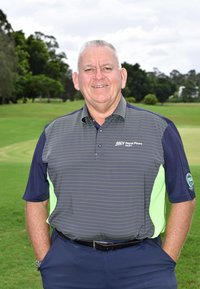 Mark is available to host corporate golf events, from providing executive coaching clinics, playing a round to key note speaking.Comprehensive half day and full day packages can be arranged to meet any corporate or charity day golfing event.
Mark can speak on golf generally, teaching, equipment and motivation with a bag full of anecdotes to keep everyone entertained 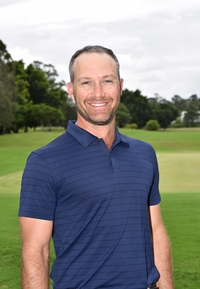 Loic Truet has been involved in the game of golf since a very early age, both in Australia and abroad. Born in New Caledonia, Loic is fluent in two languages, English and French. He also played on the European Amateur Circuit for over four years where he enjoyed some success. Loic went on to complete a trainee-ship at Emerald Lakes Golf Club in 2007.

His enthusiasm and passion for coaching drives his desire to continue to learn and deliver. Developing the abilities of his students is his number one priority. His friendly and passionate natures make him a popular teacher.

Canadian-born golf professional Nancy Harvey recently retired following a remarkable 20 year career on the US LPGA Tour. Today Nancy still competes with the US Seniors on The Legends Tour, and here in Australia on the ALPG Tour.

Nancy’s background includes a 10 year period where she managed the busiest golf course in the city of Mesa, AZ. She has been teaching golf since 1985 and has had face to face access to some of the most cutting edge teachers on the planet.

In addition to running one of the most renowned junior programs in golf, Nancy has also encouraged and assisted many men and women, including an influx of ladies to her successful ‘Girls …. Get into Golf!’ program.

Already Nancy has established herself as a teacher of incredible knowledge and someone who matches that skill with an uncanny ability to truly communicate the message to her students. 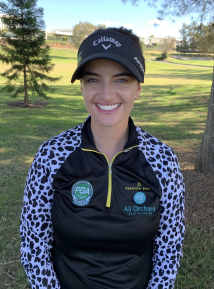 Ali’s goal as a Teaching Professional is to help people believe themselves through golf.  She strives to enhance her student’s ability to understand their golf game and boost their confidence.

Completing her PGA Traineeship in 2015 at Surfers Paradise Golf Club. Ali comes from a playing background. Her 2015 highlight was winning the PGA Pampling Plate.   With a Bachelor of Business in Sports Management, Diploma in Sports Coaching and a Diploma in Business. Ali is always striving to learn more she is currently studying for her  Bachelor Degree of Honours in Psychology.

Ali’s Amateur Career saw her represent Queensland 8 years in a row, Maintaining the #2 ranked female in Australia for over a year, Winning the South Pacific National Ranking Event and finishing 2nd in seven separate State Amateurs through Australia. Ali won the 2013 QLD Female Amateur of the Year award.

Hello from Mark, Here we are again rapidly approaching Christmas.  It’s been another challenging year due to the pandemic.  My team and I hope you and your loved ones are safe – and fully vaccinated.  Vaccination is a sensitive subject with a lot of misinformation to...
Read More

Hello from Mark, As we head into the Festive Season I am sure most of us will look back at 2020 as annus horribilis and will be glad to see the start of 2021.  During this alarming time of Covid-19, social distancing, financial distress and disturbance to our lives,...
Read More

Golfers in from the bygone era had an artistic flair – time to bring that back!

The low down on ball position secrets…

The rule of thumb pitching formula…

As your golf coach there are three ways in which I can help make a difference to a players game. These three ways all have many implications if they are not addressed correctly…

How to get better with your game with no swing changes

After teaching and talking to golfers for more than thirty years I have observed a consistent pattern that emerges with some club golfers and it goes like this – The player will begin the round well and after about four or five holes hits a bad shot or two. The immediate reaction is to start analyzing their swing and attempt to correct what they THINK has caused the bad shots.

Chris & I would like to thank you for sharing your experience and expertise. Your lessons are certainly paying off. Not only are our handicaps coming down but most important, our confidence is rising. It feels great to at least be competitive. Remember when I as blaming my new clubs, they are now working a treat! Once again many thanks, by following your advice we look forward to lowering our handicaps even further. We can recommend your lessons to anyone who wants to improve their game.

My son Edward has been under the watchful eye of Nancy several times each week for the last 12mths now both in her group short classes and private lessons. Nancy’s dedication and commitment to sharing her knowledge and skills to the younger generations is remarkable. The improvement of my sons skills is very noticeable….. he just loves his golf and loves Nancy. I also have enjoyed both private and group lesson with Nancy, thus enabling myself to enjoy a gold social game of golf with friends. It’s is so pleasing to see a former LPGA professional champion golfer giving so much back to the sport. Thank you Nancy for taking Edward under your guidance. I would not hesitate to recommend Nancy a for either group or private lessons golf for both junior’s or adult’s.

I’m blown away with my progress over the past 12 months. Did you know that I was on a handicap of 26 when we first started working together? I am now playing off 12 thanks to our weekly lesson schedule.

Chris & I would like to thank you for sharing your experience and expertise. Your lessons are certainly paying off. Not only are our handicaps coming down but most important, our confidence is rising. It feels great to at least be competitive. Remember when I as blaming my new clubs, they are now working a treat! Once again many thanks, by following your advice we look forward to lowering our handicaps even further. We can recommend your lessons to anyone who wants to improve their game.

Whether you’re a professional athlete or a young aspiring athlete, Nancy Harvey is dedicated tremendously to her students. Nancy’s energy and enthusiasm is contagious. Her training technique not only builds a strong/well-conditioned athlete but her approach more importantly builds confidence in athletes to believe in their ability to reach new heights. Nancy has a deep understanding of “the swing” and of people’s strengths and abilities. Her knowledge of “the swing” allows her to break it down into simple key components for a student to easily understand. Nancy Harvey is an incredible coach and mentor.  Without a doubt the best I have ever worked with!

Just letting you know that I’ve just won the Lord Mayor’s Trophy here in Bundy. It was a two round stableford event. I’ve just turned 70 and am playing the best golf ever thanks to your expert guidance. Will be coming down soon for a refresher! All the best,

Now back in Sydney. Enjoyed my lesson last Sunday, then played a round. I hit consistently and solidly off the tee, as well as with the 3 hybrid off the fairway, finishing three under my handicap. A good lesson indeed!

Nancy welcomed me into her golf world of knowledge, fun, and enthusiasm.  With time she has turned my golf around with a degree of successful achievements and personal challenges.  Her passion for this game rewarded her with many International Professional achievements which has now enabled her to teach all levels of golfing enthusiasts, from beginners to the experience golfers, her professional ability and sensitivity adapts to the individual. Ten years down the track, with a desire at 70 to crack the single figure handicap, I cannot think of anyone else who could possibly get me over the line.  Nancy is an amazing lady, a true competitor
with outstanding humour which makes golfing for us all, such a  fun sport.

Thanks Nancy for your continued interest and support.